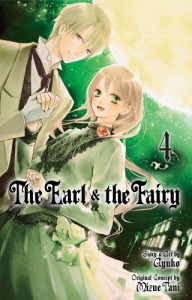 The Earl and the Fairy is a short four volume series and while some series go on far too long this one ended leaving you feeling there was more that could have been said.

Set in 19th century England, Lydia Carlton is a fairy doctor-one of the few people who are able to see fairies. When she is rescued from kidnapping by Edgar Ashenbert, Earl Ibrazel, he claims to be the descendant of the Blue Knight Earl, human ruler of the fairy kingdom. But he needs Lydia's help as a fairy doctor to claim his birthright. But is it really his birthright to claim or is he lying?

The artwork was lovely but the story felt incomplete. We have a wonderful back-story set-up without the follow through. We have the Earl and his servants sold into slavery from England to the States as children with the hint that the Earl may be from an upper class family but why aren't we pursuing his potential family. And our villain never makes an appearance except in name. These would have made such interesting story lines.

Reading The Earl and the Fairy is like eating Cotton Candy--very sweet but not very filling.

Buy this title at Powells Books.